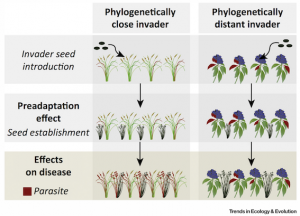 Species introductions are a dominant component of biodiversity change but are not explicitly included in most discussions of biodiversity–disease relationships. This is a major oversight given the multitude of effects that introduced species have on both parasitism and native hosts. Drawing on both animal and plant systems, we review the competing mechanistic pathways by which biological introductions influence parasite diversity and prevalence. While some mechanisms – such as local changes in phylogenetic composition and global homogenization – have strong explanatory potential, the net effects of introduced species, especially at local scales, remain poorly understood. Integrative, community-scale studies that explicitly incorporate introduced species are needed to make effective predictions about the effects of realistic biodiversity change and conservation action on disease.